WELCOME TO OUR 1,000th ANNUAL OGENJJAK!

As you know, ever since we first touched grass here on Earth, we have prided ourselves in a good competition! Our challenger today has faced great odds, surviving even our most intense forms of torture, and yes, even Bingus Squimbelling. Our challenger today will attempt to slay two of our most gruesome wildlife, each with their own difficult quirks that our challenger will have to learn to defeat them! Now, give a warm Korkish welcome to our newest challenger! … uh, well their name is not important, but let’s see what they’ve got!!

WOW, this game is incredible! This game's artwork is fantastic!!! The voice is pleasant, and the power that I have obtained multiple times has proven to be really useful in defeating the bosses. The first boss is really difficult to defeat, so play it multiple times until i finally win. After that, I expect the following boss to be even more difficult to defeat than the previous one. The flying creature, on the other hand, is easy to kill . The alien creatures in the background are very cool. The sound and music are also fantastic. However, I've noticed that when I jump over the enemy in the first level, even though I jump higher, the player sometimes takes damage. When jumping, the player sometimes collides with the enemy, and sometimes it doesn't! Otherwise, it's an excellent game. keep going !!

TEACH ME HOW TO MAKE GOOD GAME LIKE THIS 😭

The art style is charming, though the player character looks jarringly out of place.

Writing is fun and, although brief, gives me a sense of humor and playful setting. I enjoyed the random ending text. Perhaps expand the concept to cheers/jeers from the aliens in the stands?

Boss pushes player outside of the visible screen area and it seems like I just have to wait for him to attack to get past into a place I can see the character.

Gameplay feels a bit simplistic, but perhaps the choices aren't telegraphed enough to me as a player. I tried the first boss a few times but couldn't beat him. It seemed like my only choice was to just hit him and avoid the projectile now and then, but his health is quite high so I couldn't kill him before death.

I like the powerups. Could be fun to have some theming for that, like aliens throwing down treats for their favorite gladiator.

The intro screen should either not play or be skippable in entireity on replay.

Thanks for playing our game and the feedback! We'll think about adding sfx for the aliens in the stands!

For the boss pushing players outside of the visible screen area, is this for the first or second boss or both?

For the first boss, you need to time your jumps just right to avoid the charging attack. As other comments have stated, the jump itself needs to be fixed so it doesn't have to be so precise for the player to avoid. I can assure you its possible though!

We'll work on the theming, and the original plan was to have the aliens throw them in actually aha. We ran out of time to put in the MC animation so we used Unity assets, best to have something than nothing. And lastly, we will look into making the intro screen skippable, thanks!

For pushing outside of the arena, it was first boss. I never beat him. I did not notice a charge attack at all, he was always in melee range as I smacked at him. Sometimes he was a bit further away, but because I was pushed outside of the screen, my focus was on moving back into visibility, not watching the boss. His charge was not clearly telegraphed to me, but I don't play games like this very often so I might be missing common tropes and mechanics of this genre.

When I said charge attack, I meant that there are points in the game where the boss should move away and then run towards the player at a fast speed. What version of the game did you play? On desktop, browser minimized, or browser fullscreen. The player and boss should not be outside of the camera, and if they are this might be a resolution issue.

Browser, both fullscreen and inline.

Alright, that's very weird because it works fine for me in browser but I'll do further testing on different browser versions and screen sizes. Thanks!

This game has quite some charm, and I really enjoy the art style it has going for it. I wonder why specifically the character uses Unity assets, though.

In terms of controls... it lacks polish. The jump feels way too slow, as in, it takes way too much time for you to get propelled upwards, and the jump isn't tall enough to properly jump over the first boss. You also can't control how high your jump will be, which is extremely important for a platformer to feel good to control. You should be able to start falling earlier if you release the jump button. And while you can make a good game with a character that can only jump and attack, an extra move like a roll or a dash would have been appreciated.

The first boss is kind of janky. The boss constantly moves left and right, and it turns around if the player jumps over it, so attacking the boss feels very awkward, with them pushing you as you attack them. The second boss is much better, but still nothing very exciting. If the controls were better, it might have been a better experience.

Overall, I could take some fun from it, and there is potential to be found, but lack of polish in both the player's controls and the boss' patterns push this game back.

And well, the game ties into the Game Jam's theme in an extremely loose way. It's a very unimportant narrative point, while other games made it a central mechanic of their game, or at least an important one.

Thanks for taking the time to play our game and leaving such a detailed review!

With regards to the controls and boss, that is something we will continue to polish and look at.

Hey thanks for taking the time to play and leave a detailed response! The current player art was supposed to be a placeholder until the real art/animations were ready. Unfortunately, though things came up and the real art didn't make it in on time. But we're hoping to make an update after the jam to add them in!

This was my first time creating a fighting game and creating a boss, so I appreciate the feedback and suggestions you had regarding the controls and bosses. That's something I'll work on and try to tweak when we release an updated version :)

Ooh, yes a nice damage pop up can be worked on, thanks for your feedback and playing our game!

Thanks for the kind words, appreciate it! I think the damage pop ups would be a great addition. Thanks for playing and your thoughts/comments!

Haha thanks for the praise! 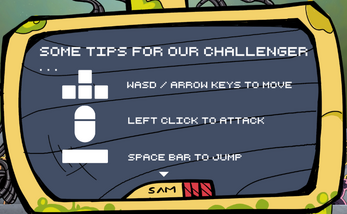 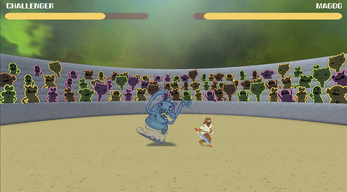 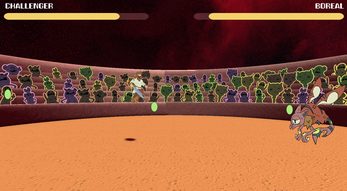